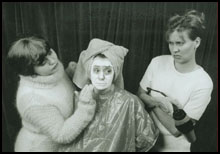 Our Mission
The Phoenix Arts Association Theatre believes in the power of theatre to enrich our lives and our community. We are dedicated to producing theatre that strives for artistic excellence; is affordable and accessible; provides a nurturing environment for new voices to be heard where the plays, artists and audiences reflect the vitality and diversity of our community. We present as many San Francisco and World premiere works as possible by Contemporary Playwrights and occasional classics. We encourage and nurture new work by Bay Area Theatre Artists & Writers. Above all, we are committed to creating theatre that ennobles the strength and beauty of the human spirit.

History
The Phoenix Arts Association Theatre, designated a San Francisco Legacy Business in September 2017, is now approaching its 34th season. Founded in 1985, the Phoenix enjoyed nearly 14 years of vital theatre performing in our South of Market venue until 1988 when we relocated to 653.655 Geary Street. For two and a half years we thrived there; creating a second stage and joined forces with our newly founded West Coast Playwrights Alliance until (due to city retrofit ordinances) we moved to our present home in the historic Native Sons Building in March 2002 where our Theatre I and newly created Theatre II continue to flourish in its history. The Phoenix has housed hundreds of productions, staged readings, and acting and dramatic workshops presented by our own company, as well as those of visiting companies and theatre artists. We have received numerous awards by the Bay Area Theatre Critics Circle, Dean Goodman Dramalogue Awards, Backstage West as well as critical acclaim from other local and foreign press. We have performed both at the Edinburgh Fringe Festival and the Avignon, France Off Festival and served as a venue for the San Francisco Fringe Festival. A member of the Theatre Bay Area since our inception, and of National New Play Network, the Phoenix has been known as a venue nurturing the production of new work in an ongoing effort dedicated to keeping live theatre alive.

A native of Washington D.C., Linda Ayres-Frederick has been a lifelong theatre professional who has served as Founder and Executive Artistic Producing Director of both the Phoenix Arts Association Theatre since its inception in 1985 and of the West Coast Playwrights’ Alliance (WCPA) since 1999.

During her long stage career as an Actress, Director, Producer, and Playwright, she has received considerable acclaim and numerous awards.  Twice a Shubert Playwriting Fellow, Linda has seen her plays receive over 30 productions and 50 readings in the SF Bay Area, Washington, D.C., New York, and Alaska. As an actress, she has performed in scores of productions nationally and internationally in the Edinburgh Fringe Festival and at the Off Festival in Avignon, France, garnering 5 Star Reviews along the way. Throughout her career, Ms. Ayres-Frederick has vehemently supported new play development. A resident playwright with 3 Girls Theatre, Linda is also a member of SF Bay Area Theatre Critics Circle (VP), American Theatre Critics Association, the Dramatists Guild of America, AEA, AFTRA/SAG, and the Monday Night Playwrights, San Francisco’s longest running Playwrighting group. She has written reviews and articles for SF Bay Times, Westside Observer and forallevents.com. and has served on numerous Boards and Committees that have advanced the cultural climate of the San Francisco Bay Area.

A Sarah Lawrence College Graduate, Linda has resided in San Francisco since 1972.

Technical Director
Ty Mckenzie
Years ago Linda opened her theatre to a green theatre tech and allowed her to play, learn and grow. Ty in addition to continuing her wonderful relationship working with Linda is a theatre owner herself.